Fujitsu Limited is a company that creates a vast variety of products, from hardware to software and systems development. While the company felt that it wanted to communicate, both in-house and externally, the importance that it places on “UX(User experience), it was agonizing over what that message should be and how it should be communicated.

This led Mr. Yosuke Yokota from FUJITSU DESIGN LIMITED to consult with Loftwork Inc., a company that both understands UX and is skilled in thinking from the assignment working together with the client. In such a way, a project to design a new tool to introduce Fujitsu’s approach to UX was launched, without determining what that final result should be.

Start a project without deciding on the deliverable!?

Yokota, FUJITSU DESIGN LIMITED: At first, we were talking in-house about promoting “UX” in Fujitsu. User experience can be interpreted really widely, however. So, rather than Fujitsu deciding, on our own, what to produce to address this aim, we decided that it would be better to work together with Loftwork Inc., a company that deals with UX, to think about the most ideal way of conveying what “UX” is for Fujitsu.

Shigematsu, Loftwork: I see, so that was the background to the project. Which reminds me, you have worked with Tanahashi (Loftwork Inc. Innovation Maker) in the past too.

Yokota, FUJITSU DESIGN LIMITED: I was test-developing a workshop product called “Shaberu Kado (Talking Cards)” when I was working with Loftwork Inc. We started with a vague assignment, which was to “create something that can change the overall flow of a workshop.” We thought it up and produced it together. So I knew that if I worked with Loftwork Inc. on this project, you would do a thorough job of thinking things through with us. So I went straight to you to talk.

Shigematsu, Loftwork: In that first meeting, when I asked: “What are we going to make?” I could not get an answer from you. “Let’s think about that as we run with it,” is what you said to me. There was this fun mood about the whole thing as if you were plotting something, and that influenced me. I thought, “Well, let’s plot it together in that case!” Then, straight after the meeting, I rang Mr. Akutsu and asked, “How do you feel about being part of this plot?”

Akutsu, IDEASKETCH: Mr. Shigematsu called me right after the first meeting. Even over the phone, I got a sense of his fun mood. Yes, it felt like something fun was going to happen.

Knowing what all the members' values are: team-building for good output

Shigematsu, Loftwork: “UX” and “UX design” are interpreted completely differently from person to person and company to company. So, before thinking about the product that we were to make, we started off by aligning all our individual understandings of “UX” and “UX design”. “UX design” is the design of experience. Therefore, proposed that we share stories about things that have changed our experience in daily life or things that were interesting as experiences, and then do some brainstorming.

Akutsu, IDEASKETCH: Because we had time to share our experiences and things that we like, we were able to get a sense of each project member’s individual personality. This enabled us to treat each of the project members not as “clients” but as “people.

Shigematsu, Loftwork: We all brought along things that we like and talked about our emotional attachment to these things. I felt that this helps you get to know each other. When jobs proceed in the usual way, you often don’t know much about the actual client. When you have to work without knowing how the person who’s right in front of you thinks or what his or her value system is, the outcome ends up superficial and ends up being judged in a purely visual way as a deliverable. I was conscious of team building because, in this project, we wanted to get an understanding of the project members’ tastes in a way that you would be unable to in normal circumstances, and then make something that each member would be truly delighted with.

Shigematsu, Loftwork: While we are involved with “UX” and “UX design” in our work at Loftwork Inc., as I was looking over everything afresh, it make me conscious, once again, of how difficult it is to understand words. This led us to feeling that we wanted to make the word “UX” easy to understand—or that we want to make it simple, in any case.

Akutsu, IDEASKETCH: I brought along a referrer and, as I was talking about it, I said to Mr. Shigematsu that I wanted to make UX really easy to get across—as easy as teaching a kid the alphabet. Take for example “the words picture book” written by Taro Gomi. All the words in the book refer to commonplace things, but when you have pictures along with the words, it’s really easy to understand.

Shigematsu, Loftwork: In our discussion about the referrer, we spoke about how completely straightforward and obvious the letters “A-I-U-E-O” were. We were saying how great it would be if we could explain UX and Ux design as straightforwardly as these letters “A-I-U-E-O” and we struck on the idea of calling the thing we were creating AIUEX! Without letting that level of excitement sag, we prepared the proposal.

Yokota, FUJITSU DESIGN LIMITED: I felt that our task was to think of an easy way to communicate the common understanding everyone had of UX. So when the “A-I-U-E-O” idea came up, I got the immediate impression: “Yes, this is it.”

Shigematsu, Loftwork: After deciding that the thing we were making would be called “AIUEUX”, we did some brainstorming on user-experience-type words that would fit with “A-I-U-E-O”. We asked illustrator Mr. Nonaka to join in the process from this brainstorming stage.

Nonaka, Illustrator: Particularly because this project was for a tool to introduce Fujitsu’s approach to UX, it was good to be able to imagine scenes of the tool being used. I did the illustrations imagining how Fujitsu would explain UX and how the customers would react when people at Fujitsu handed over this illustrated tool.

Shigematsu, Loftwork: To get people in the company to notice “AIUEUX”, the letters “UX” are written in large font in a fluorescent color. This is because Fujitsu is a large company, and I had heard that even when tools are created, it can be difficult to get them to be used by everyone.

Okada, FUJITSU LIMITED: We have the “AIUEUX” pamphlet version stuck on the wall in the office. “UX” is written in big letters so it stands out quite a bit. In addition to the pamphlet, “AIUEUX” also exists in a cards version. The vocabulary on the cards is different, so we pick a card that we like and give it to the other party.

Tsuda, FUJITSU LIMITED: We also have the pamphlet version on hand so that we can give it to customers who have reacted with interest when we give them the cards version. Most customers who receive it are interested, so I feel that it is an effective tool for introducing Fujitsu’s approach to “UX”.

Kawamata, FUJITSU DESIGN LIMITED: When we took the “AIUEUX” cards and pamphlet version to a customer, they looked pleased, saying “You’ve brought us a lovely proposal.” I felt that the customer was happy that interesting people had arrived with unique cards and pamphlets and I think that was because of “AIUEUX”.

UX can do this kind of thing in any time

When you unfold the final “AIUEUX” pamphlet version, the line “UX can do this kind of thing in any time” appears with the illustrations.

In order to communicate the appeal of “AIUEUX”, which fully demonstrates the teamwork that was fostered during the project, we asked everyone who turned this idea into a reality through their superb teamwork to make pairs and show us “AIUEUX” in action. 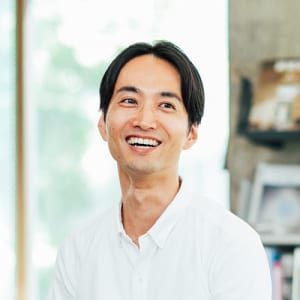